EURO 2020 - the most environmentally friendly EURO in history?

How football and climate protection go together

UEFA had to listen to a lot of criticism and accusations of greenwashing when it organised the European Football Championship held in 2021. Eleven venues in eleven countries caused a huge carbon footprint with players and fans travelling across Europe. Can climate protection and a pan-European European Championship be reconciled at all?

EURO 2020, the official name of the event, was held in eleven locations across Europe to celebrate the 16th anniversary of the sporting event, spanning over 60 years. If a Swiss fan wanted to watch his national team's three group matches, he had to travel 13,000 kilometres - not much less was covered by a Polish fan who travelled 10,000 kilometres in the group stage. For many, however, the Corona pandemic put a spanner in the works and they watched the games on their home screens. Whether this European Championship was actually the most environmentally friendly in history, as UEFA proclaimed, remains questionable.

With numerous environmental protection projects, UEFA wants to compensate for the CO2 footprint of the EURO 2020 and supports projects all over the world:

In most host cities, public transport was free for ticket holders, journalists, staff and volunteers. For the mountains of rubbish generated in the stadium, concepts were to be drawn up to reduce them, recycle the material and then reuse it. A big plus for the climate, according to UEFA: only a few new stadiums (Puskás Arena in Budapest) and the associated transport connections had to be built, thus saving a lot of resources.

For economic or ecological reasons?

Euro 2020 instead of 2021 - economic or ecological aspect? Numerous merchandise articles had already been produced before the 2020 sporting event had to be cancelled. Dispose of everything and produce it again? UEFA decided against this in order, according to its own statement, "not to produce additional waste".

Due to the pandemic, travel to the venues was restricted at this European Championship: Fewer spectators were allowed into the stadiums, and entry restrictions made it more difficult for fans to travel. But this was not foreseeable at the time of planning. It is precisely this point that Stefan Wagner of the initiative "Sports for Future" criticises. In his opinion, major events like this must always be planned from a climate perspective. Sports for Future is an alliance of athletes, sports clubs and associations, fans and supporters that supports the "Fridays For Future" movement and campaigns for climate protection.

“Of course, we also know that climate protection starts with avoiding a footprint, reducing it and only then offsetting it. Compensation as a last resort is perfectly acceptable as long as we have no other solutions. But we have to start by aligning the Euro in such a way that it can take place in the most climate-friendly way possible.

Stefan Wagner, Board of the "Sports for Future" initiative

The British football club FC Arsenal is committed to more sustainability in sport: quite specifically in the stadium. Since 2019, beer has only been served in returnable cups. This saves up to 25,000 disposable plastic cups - per game! The club wants to send a signal and also encourage its fans to think about sustainable behaviour. More and more initiatives are calling for plastic to be shown the red card, including Friends of the Earth with their "Get Pointless Plastic out of Football" campaign.

This is how it works:

Disposable cups were no longer allowed at the 2006 FIFA World Cup in the stadium in Stuttgart. The reusable cup manufacturer and renter ensured clean games outside the pitch. Using a M-iQ flight type dishwashing machine from Meiko, it washed 6 million hard plastic cups.

"UEFA EURO 2024 will be the most sustainable tournament yet". The venue is Germany. The organisers have set points to achieve their goal. The EURO 2024 is to be realised with the help of a sustainable management system. The fans are looking forward to actions instead of words. MEIKO is ready and happy to support the switch to a reusable system to reduce the mountains of waste in the stadiums. 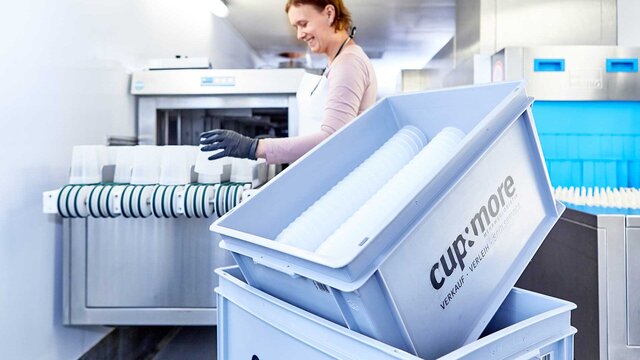 Washable Foodservice Solutions
Do you already loop? How to find ways to eliminate unnecessary waste before it happens. Learn from KLM, Tesco, TUI and others!
Read more 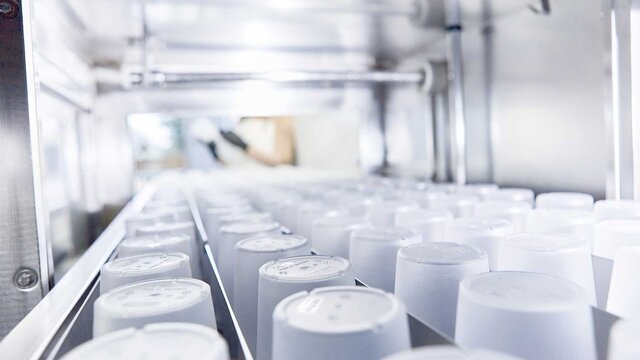